I received this book from Xpresso Book Tours.

I wanted to try really hard to get through this book, but I ended up DNF’ing at 61%. I was over halfway through and I found nothing about this book that made me want to keep reading. I was tempted to DNF from the first chapter, so I’m pretty surprised I managed to make it this far. There will be spoilers.

There’s this scene in the show Brooklyn 99, where Terry asks Jake what he liked about Terry’s novel and Jake says something along the lines of “I liked the space between the words.” as he was thinking of a compliment. That is how I feel about this book, because I wasn’t able to find much that I liked other than the cute headers of each chapter.

So, I read mostly YA books, but I thought that the synopsis of this book sounded interesting so that’s why I requested it. I love fantasy and I have never read a fantasy novel with a Unicorn main character, so I decided why not? The plot focuses on a unicorn named Talia and her dragon protector, Bryn. They spend the majority of the novel trying to track and kill a demon, but every time they got close, something came up and they weren’t able to.

Talia White is one of the whiniest main characters I have ever read. If this book did not explicitly state that she is thirty; I would have thought that she was an immature preteen. She constantly throws tantrums and is overdramatic whenever she doesn’t get her way. I mean the book literally starts with her clinging onto someone’s leg because she doesn’t want them to leave her? There were no redeeming qualities that made me like her.

She also always seemed to make the worst decisions. Talia compared her fear of clowns to Bryn’s fear of her driving, yet she steals cars and drives recklessly, so man I’d be scared too. Then, she has the bright idea of luring a child that is possessed by a demon to her windowless van and then gets pissed at Bryn when he tells her that it’s a terrible idea that will land them in jail. Her common sense was seriously lacking.

Bryn O’Bannon also had nothing memorable about him. The only things I really remember are how rude he was to Talia and the amount of times Talia thought about how attractive he was. He also had a tragic™ backstory, but it didn’t really make me pity him. There was one scene where Talia disregards his feelings and he said “Fuck if I don’t feel like a chick right now.” which implies that having emotions is a girly thing? For all of Talia’s talk about equality and feminism, all she did was laugh off his statement.

The romance between these two was even harder to read as well. There was completely unneeded insta-love and he marked her as his soulmate within a few days of knowing her? Especially that 90% of those few days were spent arguing with each other, but all of a sudden he knows she’s his soul mate and tells her he’s falling in love with her.

Maddie was the only rational person in this book. She reacted like any person would if you told them some dude you’ve known for a few days claims you as his soulmate. She’s fierce and was ready to tear him to pieces for it, but Talia just played it off as if it wasn’t such a big deal. She reacted like Talia should have acted instead of just accepting it.

Usually even for books that I disliked, I can think of people that would like it, but there’s nothing coming to mind at the moment. I wouldn’t recommend this to anyone, because of how much I didn’t enjoy it, but if for some reason you want to give this book a chance here’s some information below: 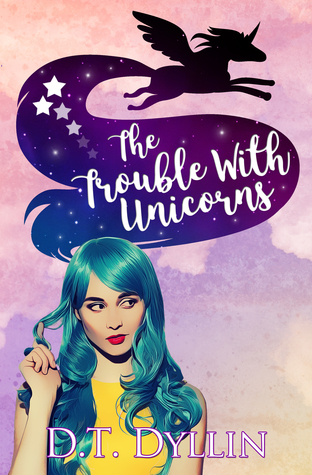 Talia White does what comes naturally to a unicorn: Balances the scales between light and dark with hefty doses of love and joy.

Faced with a string of high profile demon possessions, Talia is determined to do her job, despite the fact that she finds herself strapped with a brooding dragon warrior as her new guardian.

That’s the trouble with unicorns … they’ll accomplish their goal one way or another, even if they have to get a little stabby to do it.